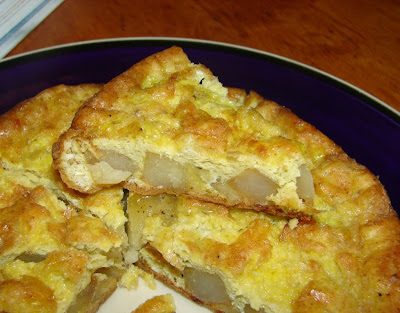 Our French Fridays with Dorie recipe of the week is for a Basque Potato Tortilla. I have to be honest and admit that I was not too excited about this one since I am not an egg fan, but I made a mini version hoping the kids would enjoy it. I am trying my best not to miss FFwD and like to expose my kids to many different foods, even if they aren't my favorite, to expand their culinary palates. Also, I keep thinking one day I will try an egg dish and like it, taste buds change over time, so I had to give this a go. 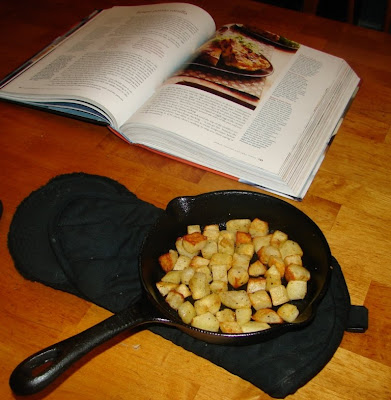 This recipe starts out with potatoes and onion that are browned in a cast iron skillet. Yummy! I pulled out my mini cast iron skillet, happy to have an excuse to finally use the thing :) I decreased the ingredient amounts to 1/3 of the original recipe. 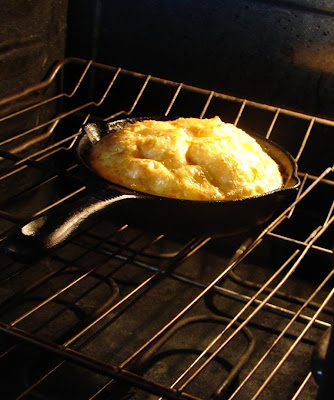 After cooking the tortilla on the stove for 8 minutes, it is then broiled for a minute or so under the broiler. My tortilla puffed up a ton, but fell soon after it exited the oven. 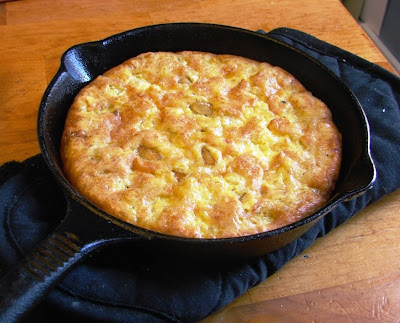 No problems with releasing this little guy from the pan. Whew! I was a little nervous about that. 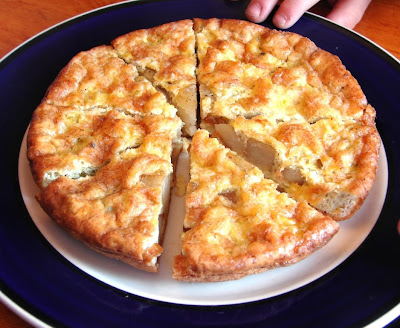 I cut it into eight tiny triangles and the kids were eager to give it a try. I hyped up this recipe and how yummy it would be. Notice the little fingers going for a slice on the above photo. At first bite the kids all said it was good, my oldest called it a potato pie. Then a second bite, and the opinions changed, "it's a little good, but a little lame," said my three year old son. Uh-oh, nothing worse than a lame tortilla! Then my four year old son told me it was good, but he didn't want to eat it right now, he did later come back and finish his piece, yay! My daughter ate about three bites of her tortilla triangle, but didn't finish it. Sigh, I guess they get their egg taste buds from their mommy. 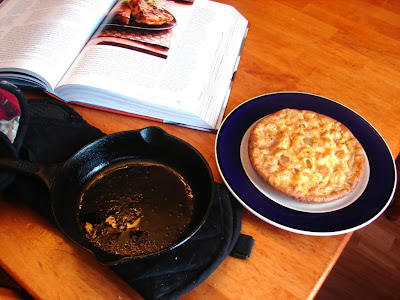 Will have to report back later once picky husband gives this a try, we will save the rest for him. He likes eggs and potatoes so this one might be a winner with him. Even though this isn't a new favorite (pending picky husband's taste test, who knows, he might love it) it was still a fun recipe to try, it was nice to see the components come together and the finished tortilla.

Yours turned out great! I loved this recipe..it was so easy and didn't stick to the pan like I was afraid it would! My kids ate this up in one day!! Mine will be posted on FridaY!

Wow! Your recipe look so delicious!

Yours looks so fluffy! I will have to try making it with potatoes next time.

So many things seem to be better as minis don't you think! Great job!

Mini versions - love that! And nice "puffage" in the oven!

Love the poof in the oven! Beautiful results!

I guess it's worth giving most things a 'go at least once, right?

I should have made a mini - this was a lot of food. Yours looks great!

The mini cast iron skillet is most adorable...almost like it belongs in a toy kitchen!

I think I need a mini cast iron skillet! Maybe that will make me ,make this. :) Yours looks tasty!

Jessica of My Baking Heart said...

I love the mini! You're more than welcome to send the leftovers my way if you want! ;)

beautiful photos...and your tortilla looks great! So professional. Mini is a good idea!

Your mini tortilla is adorable but not as adorable as your 3 little ones. :) Now I want a mini cast iron skillet too!

Brilliant idea!!! A personal pan potato tortilla! I'm in love with your little mini cast iron skillet! This was such fun to see. Great job!

Yay for you! I love that you are willing to make dishes that you might not be too excited about, in hopes of exposing your children to new tastes! I can't wait for Ella to start eating solids so I can get her inner frenchie going. Well done.

I have my sweet two year old (who is now six!) to thank for "nummy." When I create something in the kitchen that he likes he gives me a big grin and says, "Mmmm, so nummy!" -- which just melts me.

Andrea at Nummy Kitchen
I'm a stay at home mommy to three wonderful children that I adore, and wife to a very picky husband -- always trying to find a dish that will be his new favorite. I enjoy being in the kitchen trying new recipes and especially love baking and international foods. I am a lifelong vegetarian but my husband and kids are omnivores. I have a huge 'small kitchen appliance' and kitchen gadget collection. I don't know why but I just love unitaskers. Along with kitchen gadgets, I have a huge collection of cookbooks, and also love specialty bakeware. Sitting down with a cup of honey sweetened fruit tea and paging through a cookbook is my way to relax.

Little Loves of My Life

Thank you so much for visiting Nummy Kitchen! I would love to hear from the readers of my trials and triumphs in the kitchen! If you have a question about a recipe or ingredient, or just want to say hello, you can reach me at: